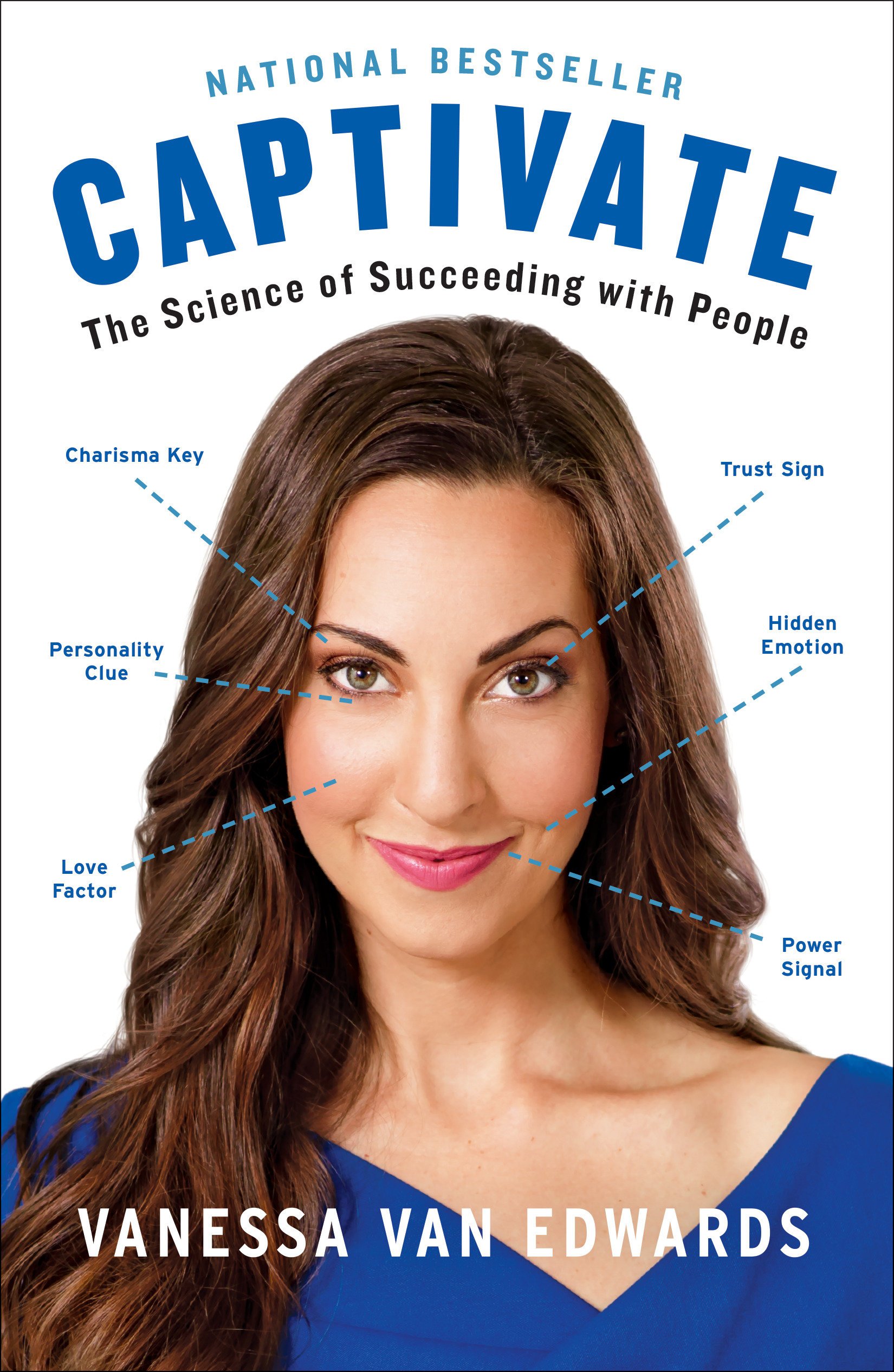 Captivate: The Science of Succeeding with People by Vanessa Van Edwards

A grab bag of charisma techniques. This is not the first book I would start with, but there are some fun tips in here.

Most of these emphasize the “Unexpected” aspect from Made to Stick, but this is only one part of the SUCCES framework.

You can’t “fake it until you make it”, because peoples’ social radars are very finely tuned to detect when people are being fake. If you force yourself to enjoy something you don’t enjoy, or when you are faking it, the quality of your social relationships will deteriorate because most people can detect that you’re faking it.

The most e-mailed articles list on the New York Times: Thirty-five percent of the articles on the viral list promised a story. (The most effective headlines) “My Dark California Dream” or “Lady Gaga and the Life of Passion”

Instead of “I’m a writer”, try “I’m a professional people watcher”, and put fun visuals on your business card.

Use introductions to highlight people

I would ask people, What’s your biggest challenge right now? and then connect them with at least three people who I thought could help. I would literally take out my phone, make the call, and hand the person my phone.

If someone mentions they went to private school growing up, don’t say, “Ugh! I hated those preppy kids. I went to good old public school.” Instead, note it and resume looking for something you do have in common. (You might say, “Interesting! Did you play any sports?” or “Wow, I didn’t know that, tell me more!”)

Don’t fall into the not me! trap; instead, find a way to say me too!

Instead of “Should I ask about her book? How much I love her books?”, try “Do you like soup?”

Alternatives to “how are you doing?”:

Put a unique quote in your e-mail signature. Noah Kagan, creator of an e-mail and analytics software, has a funny sign-off on all of his e-mails: “Ps. Y u NO install the free SumoMe.com to get more e-mail subscribers?” The purposeful misspellings and play on a popular meme makes his ask unique and very clickable.

Spice up your job title. Quicken Loans has a “vice president of miscellaneous stuff” who helps with a little bit of everything. Houghton Mifflin Harcourt calls its receptionists “directors of first impressions” since they are typically the company’s greeters.

Instead of sending thank-you cards, send thank-you stickers—or pins, or lollipops, or popcorn. At the Be Sage wedding conference, they gave attendees coloring books and pencils to use during sessions and on the plane ride home. People loved them and shared tons of pictures of their creations on social media with the conference’s hashtag.

The first day was the hardest. I walked into my first networking event as a sweaty, jittery mess. What if I freaked people out? What would I do in those horrible long pauses of silent disgust? Can you get kicked out of networking events for not networking?

I completely panicked when a gentleman introduced himself. But I shakily held up my first card: “I’ve taken a Vow of Silence. I’m trying to become a better listener.”

To my delight and surprise, he laughed and told me how he had once lost his voice to laryngitis in college and it was one of the coolest and craziest experiences of his life. Then he spoke about meeting his wife a few weeks later. Then he shared his hope for his children. Then he asked for my card. I didn’t say a word. I didn’t have to. He just wanted to be listened to.