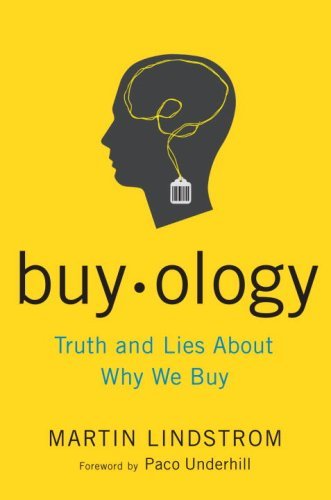 Buyology: Truth and Lies About Why We Buy by Martin Lindstrom

This was assigned reading for my undergrad marketing course. I read it in one sitting at the school bookstore, then put it back before buying it, and typed up these notes so I didn’t have to pay for overpriced textbooks 😉 Posting this review online almost got me kicked out of class, but now that I’ve graduated I can freely post this to my website. (Hint: it’s not a good book, you shouldn’t read it unless it’s required to get a degree)

Instead, you should just read The Elephant in the Brain

Chapter 1: A Rush of Blood to the Head

Chapter 2: This Must Be the Place

Chapter 3: I’ll Have What She’s Having

Chapter 5: Do You Believe in Magic

Chapter 7: Why Did I Choose You?

Chapter 8- A Sense of Wonder

Chapter 9: And the Answer is… Neuromarketing and Predicting the Future

Chapter 10: Let’s Spend the Night Together- Sex in Advertising

Chapter 11: Brand New Day- The Future of Marketing and Advertising

Brain simultaneously processes all information, and a lot gets removed as clutter. i.e. where you last put your room key

Wrong. simply helps us decode what consumers are already thinking about when we get confronted by a brand/product.

We like to think we’re rational animals, bu the more stress we’re under, the more frightened and insecure and uncertain = massive irrationality

Companies most of the time don’t know how to engage us authentically vs. just attracting attention with a naked girl

What people say in surveys and focus groups for market research (quanti and quail) does not RELIABLY affect how they behave.

Read Montague study - fMRI test said people rationally liked pepsi, but when told the brand before drinking, diff part of brain said that they like coke (purely in response to the brand).

Tom Freedman - test public response to campaign commercials to bush-kerry election = use fear. By 2012, all election campaigns will be decided using neuroscience

Use volunteers from US, Germany, England, Japan, China.

Religious brands are smashable - if you smashed it into a thousand pieces you would still know where it came from.

Chapter 7: Why Did I Choose You? The Power of Somatic Markers

Chapter 8: A Sense of Wonder, Selling to our Senses

If sex doesn’t work, why is it still so prevalent?

EX where mirror neurones backfire - Nolita - campaign against anorexia, pic ad of 68 pound model, made anorexics want to IMMITATE her .

1) SALES & DISCOUNTS - hoarding effect. It takes 7 years for a brand to recover after being discounted. As retail stores around the world have no real alternative to discounting, they’re conditioning our brains to EXPECT LOWER PRICES 2) ALL PRICES WILL BECOME NEGOTIABLE

RESTRAINED SPENDING BEHAVIOUR WILL STICK (even after recovery)