Average is Over: Review and Summary Notes 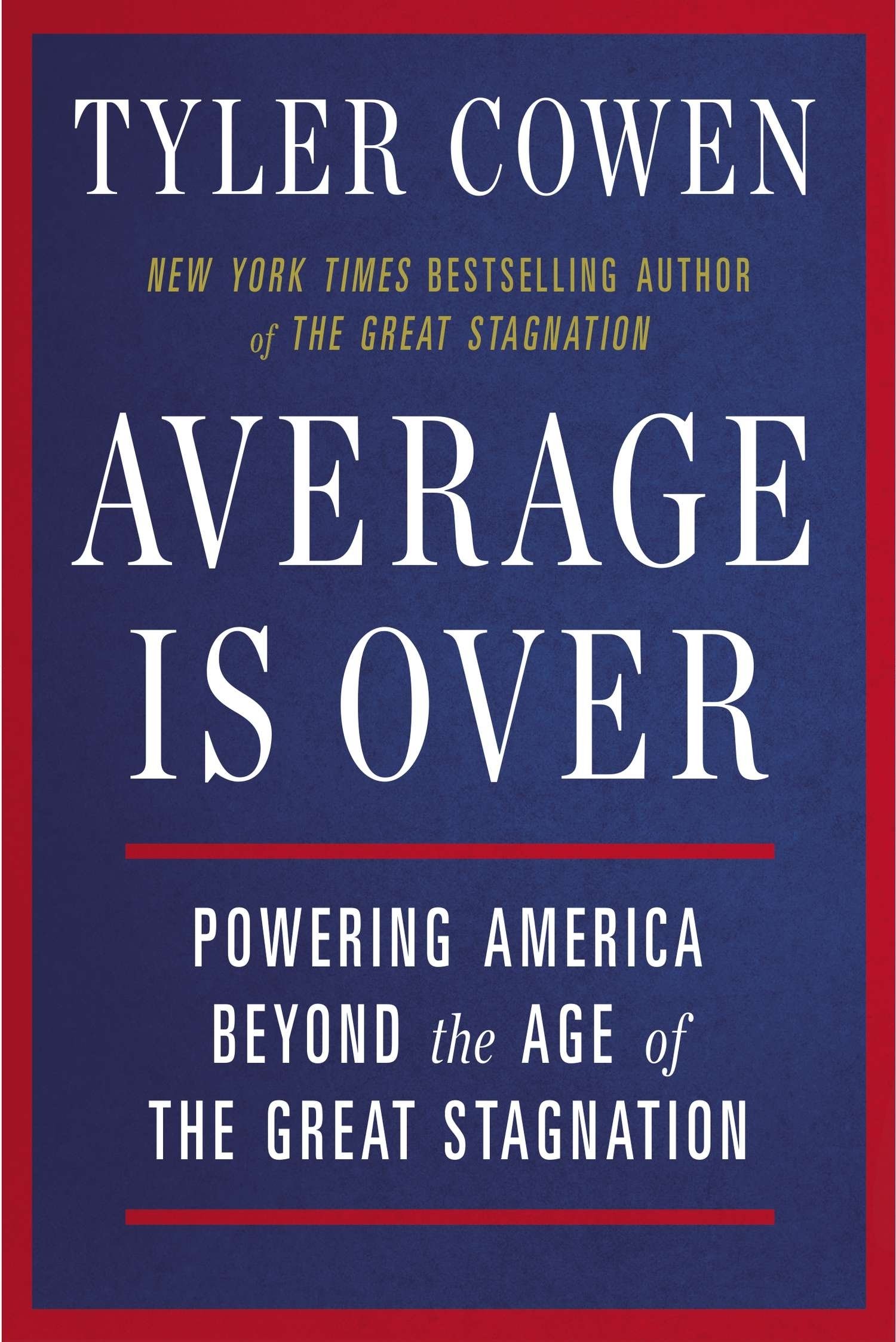 Average is Over: Powering America Beyond the Age of the Great Stagnation by Tyler Cowen

Tyler’s main thesis is that increasing technological advancement is creating a “hyper-meritocracy”, where winners win big and losers lose everything. “Average is Over” highlights how little-understood advances in machine intelligence have hollowed out the middle class, because in the future, there will be nothing to do in the “middle”.

Reminds me of The Refragmentation.

In today’s global economy here is what is scarce:

Here is what is not scarce these days:

My biggest highlight in this book is its debunking of the myth of the “centaur” human + machine collaborator: there is a popular misconception that while computer chess programs can beat humans, a human + computer team can still beat a computer alone. While this collaborative “freestyle” chess could indeed beat computers in the past, since 2007 solo computer players now completely dominate any human + machine team. Nowadays, adding a human player just makes computers worse:

The programs, playing alone without guidance, may not be so easy for the human to improve upon. If the program’s play is close enough to perfection, what room is there for the human partners to add wisdom?

We tell ourselves that “even if a computer can beat me, at least if I work together with a computer I still won’t be replaced!” because this is comforting in the prospect of being replaced by a machine. But the reality is that this is only a transitional phase, after which the computers have improved enough from our collaborative input that they don’t need us at all.

In many industries, an important skill today is working well with an intelligent machine, but going forward the key skill will become recognizing when to completely yield to a machine and work on something else instead. This is difficult because ego prevents us from admitting that computers are better than us at tasks that seem “intrinsically” human.

At first the machine hardly adds anything and it’s really just an investment in building a better machine. At the second step, experts—in the field of the program’s operation—will be required to work with the machines, to fill the gaps in what the machines can do. As the programs improve, the next and third step is that the humans understand the programs very well, with a minimum of expertise—but expertise nonetheless—in the relevant industry. These workers will essentially be information processors, albeit with an understanding of context. The fourth and final step is that the human isn’t needed much at all because the program on its own is so strong.

I think this is an important takeaway because the “centaur” idea gives us false confidence that we could adapt to machine intelligence, which leaves us unprepared for the reality of us being completely replaced by machines in an increasing number of domains.

Even in old-fashioned human vs. human chess matches, there’s a lot of hidden cooperation with machines:

In human vs. human play, the value of pulling a surprise in the game’s opening phase has gone up. Let’s say I am familiar with your first twenty moves against my prepared variation and I can introduce a novelty on move twenty-one. Furthermore, I’ve been able to foresee that the game might reach this point. In my free time, before the game starts, I have asked the computer to give me its best recommendations from move twenty-one onward, against all of your possible responses. I come to the game armed with that computer analysis. In essence, for a critical segment of the game, it is you playing against me plus the computer. Compare this to the job candidate who goes into an interview with some profit projections he has pulled from an intelligent machine. If I can get the game into territory that I have foreseen and you have not, you are playing against “me plus the computer.” In my old competitive chess days, a surprise opening innovation I came up with simply meant “you against me and my home preparation,” which is a far less formidable challenge for an opponent. When preparing to play against each other at the highest levels, top grandmasters spend a large chunk of their time searching for these surprise innovations, to shift the balance of power in a game. They assemble a trove of opening innovations and analyze those moves in advance with the programs. They then hope to lure their opponents into those situations, thereby achieving “me plus the computer vs. you” for part of the game, which is a big advantage. In a sense, they are trying to get to that place in the ring that has a special machine weapon that will ensure victory. The better the players, the more important this potential edge becomes. Regular chess players who have gained the most from chess engines are those who understand how to train with the computer and how to learn from the computer. The advent of the programs rewards players who have very good memories and conscientious study habits; a player who can’t remember his or her prepared lines won’t benefit from this strategy. A human with a good memory can carry the learning of a computer program very effectively and apply that learning in a spontaneous fashion in, say, a job interview. Indeed, in plenty of real-world situations the immediate command over factual or analytical material brings a big edge. Discussions in meetings, strategies and reactions during sales calls, lawyers arguing in front of a jury, and managers in volatile, voices-raised personnel situations all try to draw upon preprocessed information at a moment’s notice. In all those cases, it matters more and more what workers have learned from the computer, or not, and how well they remember computer-derived information and advice.

Besides STEM, marketing (being able to hold attention) is a key skill in the new economy.

There is a tradeoff between being good (investing more in yourself), versus looking good (throwing more away at sending stronger signals). Marketing / signalling becomes more important as wealth inequality increases, because the people who purchase your services get more demands on their attention, attention becomes a scarcer resource, and so stronger signals are needed to advertise your value.

The more that earnings rise at the upper end of the distribution, the more competition there will be for the attention of the high earners and thus the greater the importance of marketing.