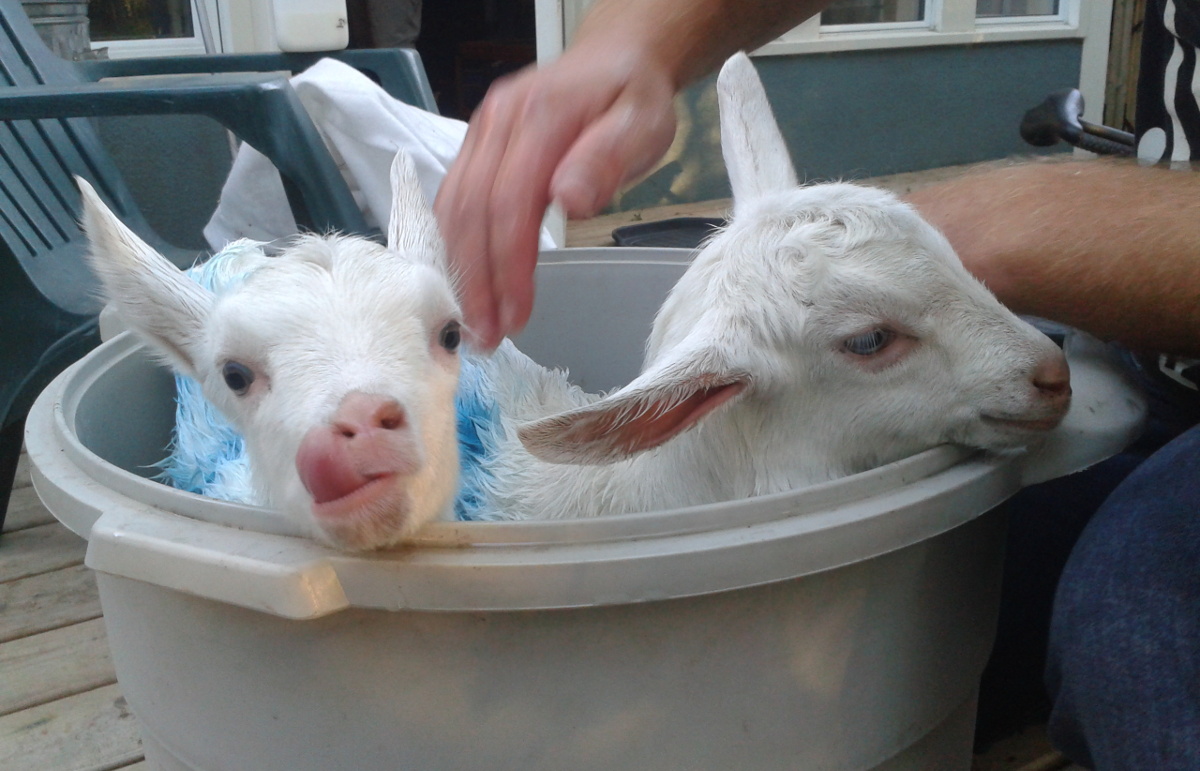 I came home surprised to hear baah baah sounds emanating from the backyard. I vaguely remembered my housemates mentioning last week that they wanted to raise a pair of goats, but given how ridiculous the proposal was, I had no reason to believe that they were serious. Now, there were two fluffy white reasons (with shrivelled-up umbilical cords still attached) running around in the backyard.

The goats needed to be washed—badly. If they weren’t bleating so loudly the first thing I would have noticed was the smell. They decided to greet the new home we built for them (a refurbished dog house) by rolling around in the muddy October dirt and defecating on the fresh layer of hay we spread inside their home. Even worse, the two-day-old goats had not yet developed the mental ability to understand how to enter their house—they were so perplexed by the flap covering the opening that we finally gave up and decided to demonstrate for them by getting on our hands and knees ourselves and crawling face-first through the flap and into the tangle of hay, mud, and poop that now furnished their living room.

Goats are eager to chew on anything you put in front of their face: weeds, sticks, fingers, drawstrings of jackets, and the scraps from your lunch that you didn’t want to finish. They have a childlike curiosity to want to understand the mysterious object in front of them—this tendency is as cute as it is frustrating. When you take them on walks you have to be careful about ensuring that they don’t chew on harmful things such as cigarette butts and plastic shopping bags billowing along the sidewalk. Their short attention spans mean that you need an inordinate amount of patience to teach them anything that would be blatantly obvious to even the dumbest dog: we kept changing their water every day for the first month as the goats couldn’t fathom how it is that peeing in the water bowl could possibly make their water taste bad.

As shitty as it is to get yourself covered in poop from cleaning your backyard every week, I quickly learned to like the goats. They became my friends. We gave them names that were fittingly Canadian: Bob and Doug after Bob and Doug McKenzie, the fictional brothers in the comedy sketch Great White North on Second City Television. One day, after a particularly long meeting with a dysfunctional group whose members couldn’t agree on how to put together a massive presentation for my marketing class, I was so glad to arrive home and be greeted by two energetic friends that would affectionately nuzzle their faces into my arms and jump around in excitement.

The goats were a hit in the neighbourhood too—every time someone wandered over to try to find the source of the short, staccato bleating noises echoing down the street, we were easily able to start a conversation and gain another friend whom we could invite to parties. That’s not counting the number of neighbours we met every time we took them on walks around the block or let them roam free in Victoria Park.

Of course, you can’t walk around with a pair of goats in public and expect to remain anonymous. During an especially heavy snowstorm in December, someone took a picture of Dave walking the goats through campus and posted it on Reddit: 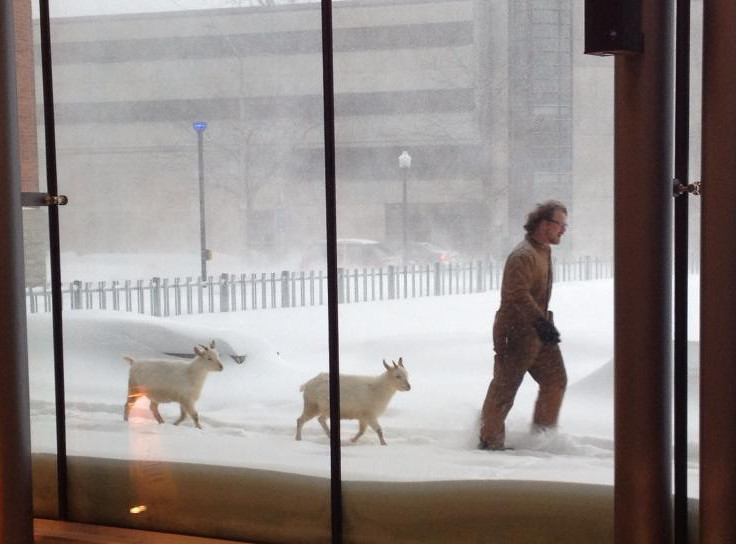 “Meanwhile in Canada” on r/funny

It instantly shot to the top of the front page and was reposted all over Buzzfeed, Tumblr, Twitter, and even the CBC’s Facebook page. We were soon swamped with messages from people who wanted to meet the goats and from presidents of campus clubs who wanted to borrow them as mascots to help fundraise for charity events.

Not everyone was as happy with having the goats around as friendly students from campus groups. Bob and Doug’s rise to worldwide fame soon attracted the attention of a bylaw officer from the city of Kingston who came by our house and told us that we had 48 hours to remove the goats from our property since we weren’t allowed to keep farm animals in a residential neighbourhood.

I was devastated—our neighbours loved Bob and Doug; it would be awful to say goodbye to my two friends. Surely we could work something out? There’s nothing in the bylaws that define pets specifically as dogs or cats. But we quickly found another home for the goats: we donated them to a therapy farm outside Ottawa for children and adults with autism and other special developmental needs.

I miss Bob and Doug from time to time. I have pictures of them waddling around on our back porch the day after they were born, still inexperienced in walking and cautious about their new home. It’s been more than two years since that day, and I still remember the frustration of spending several hours that night trying to find the right baby bottle to feed them as they refused to drink milk from anything that tasted like plastic. At the time, it seemed so important to make sure they were well-fed that we ignored everything else that was happening on a Friday night to focus on how to get an energetic animal to suck on a rubber nipple.

Moments like these are the ones I miss the most: the moment when they finally drank their milk, or the moment when they finally figured out how to enter their house through the flap—these are the most satisfying moments. Although we needed to endure the stress and frustration, we couldn’t help but beam like proud parents who had just taught their toddlers how to walk. I can’t think of anything more rewarding than the act of caring so deeply about the life of another living being. Bob and Doug: even though we could’t keep you guys around, I’m glad that you guys are able to stay at a good home, where you will be able to care for the people who need you the most.