The Goal: Review and Summary Notes 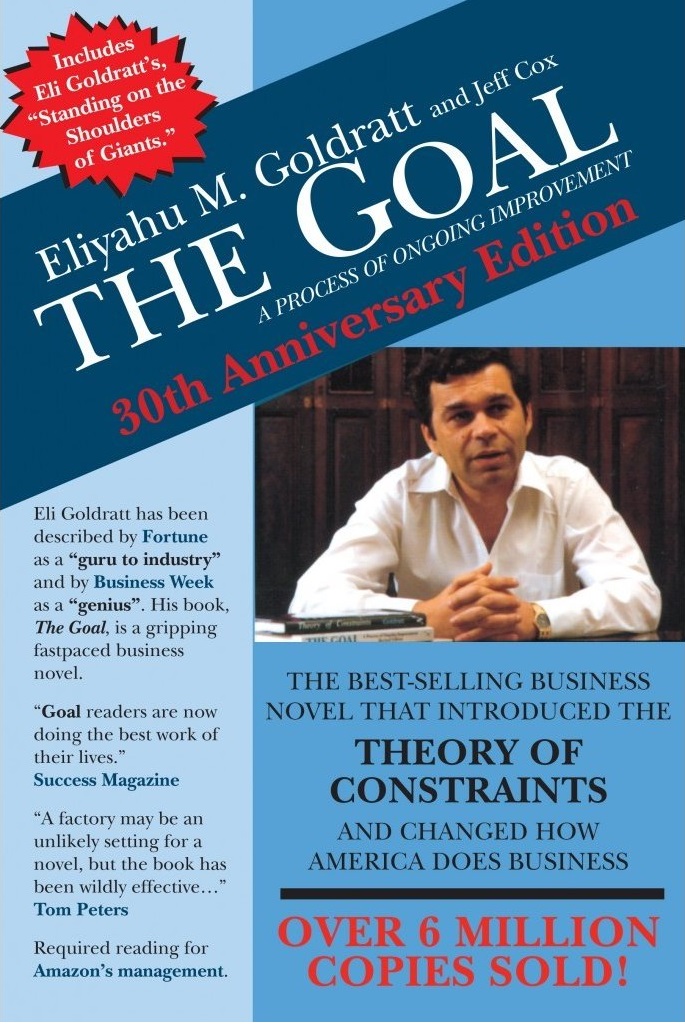 The Goal: A Process of Ongoing Improvement by Eliyahu M. Goldratt

This is THE book to read to understand how to operate a business. The theory of constraints is also highly applicable to software startups, as it explains the first-principles (physics) reasons why the “lean” approach works. The Goal is one of few books I blanket recommend to anyone interested in 10x’ing their performance.

For a similar book in the same vein by applied to software businesses, see The Phoenix Project

The goal is to increase net profit, while simultaneously increasing both ROI and cash flow, and that’s the equivalent of saying “the goal is to make money”.

Three metrics of the goal:

“Throughput,’’ he says, “is the rate at which the system generates money through sales.’’

Then I ask, “But what about production? Wouldn’t it be more correct to say—’’

“No,’’ he says. “Through sales—not production. If you produce something, but don’t sell it, it’s not throughput. Got it?’’

“The next measurement is inventory,’’ he says. “Inventory is all the money that the system has invested in purchasing things which it intends to sell.’’

How to classify intangible assets such as knowledge or expertise

“Okay, then it’s the same as a machine,’’ says Lou. “Any money we’ve lost is operational expense; any investment that we can sell is inventory.’’

Then I think about the “soft’’ things in business, things like knowledge—knowledge from consultants, knowledge gained from our own research and development. I throw it out to them to see how they think those things should be classified.

Money for knowledge has us stumped for a while. Then we decide it depends, quite simply, upon what the knowledge is used for. If it’s knowledge, say, which gives us a new manufacturing process, something that helps turn inventory into throughput, then the knowledge is operational expense. If we intend to sell the knowledge, as in the case of a patent or a technology license, then it’s inventory. But if the knowledge pertains to a product which UniCo itself will build, it’s like a machine—an investment to make money which will depreciate in value as time goes on. And, again, the investment that can be sold is inventory; the depreciation is operational expense.

He says, “Yes, but as you already know, you should not balance capacity with demand. What you need to do instead is balance the flow of product through the plant with demand from the market. This, in fact, is the first of nine rules that express the relationships between bottlenecks and non-bottlenecks and how you should manage your plant. So let me repeat it for you: Balance flow, not capacity.’’

Stacey is still puzzled. She says, “I’m not sure I understand. Where do the bottlenecks and non-bottlenecks come into the picture?’’

Jonah says, “Let me ask you: which of the two types of resources determines the effective capacity of the plant?’’

“It would have to be the bottleneck,’’ she says.

I say, “That’s right. It’s like the kid on that hike last weekend —Herbie. He had the least capacity and he was the one who actually determined how fast the troop as a whole could move.’’

Put quality control before bottlenecks, otherwise rejected work is wasted by the bottleneck.

I ask, “You mean we should put Q.C. in front of the bottlenecks?’’

The true cost of a bottleneck is the cost of the entire system, not the cost of just that one component.

“The actual cost of a bottleneck is the total expense of the system divided by the number of hours the bottleneck produces,’’ says Jonah. “What does this make it?’’

Lou takes out his calculator from his coat pocket and punches in the numbers.

“Yes, it’s right,’’ says Jonah. “If your bottlenecks are not working, you haven’t just lost $32 or $21. The true cost is the cost of an hour of the entire system. And that’s twenty seven hundred dollars.’’