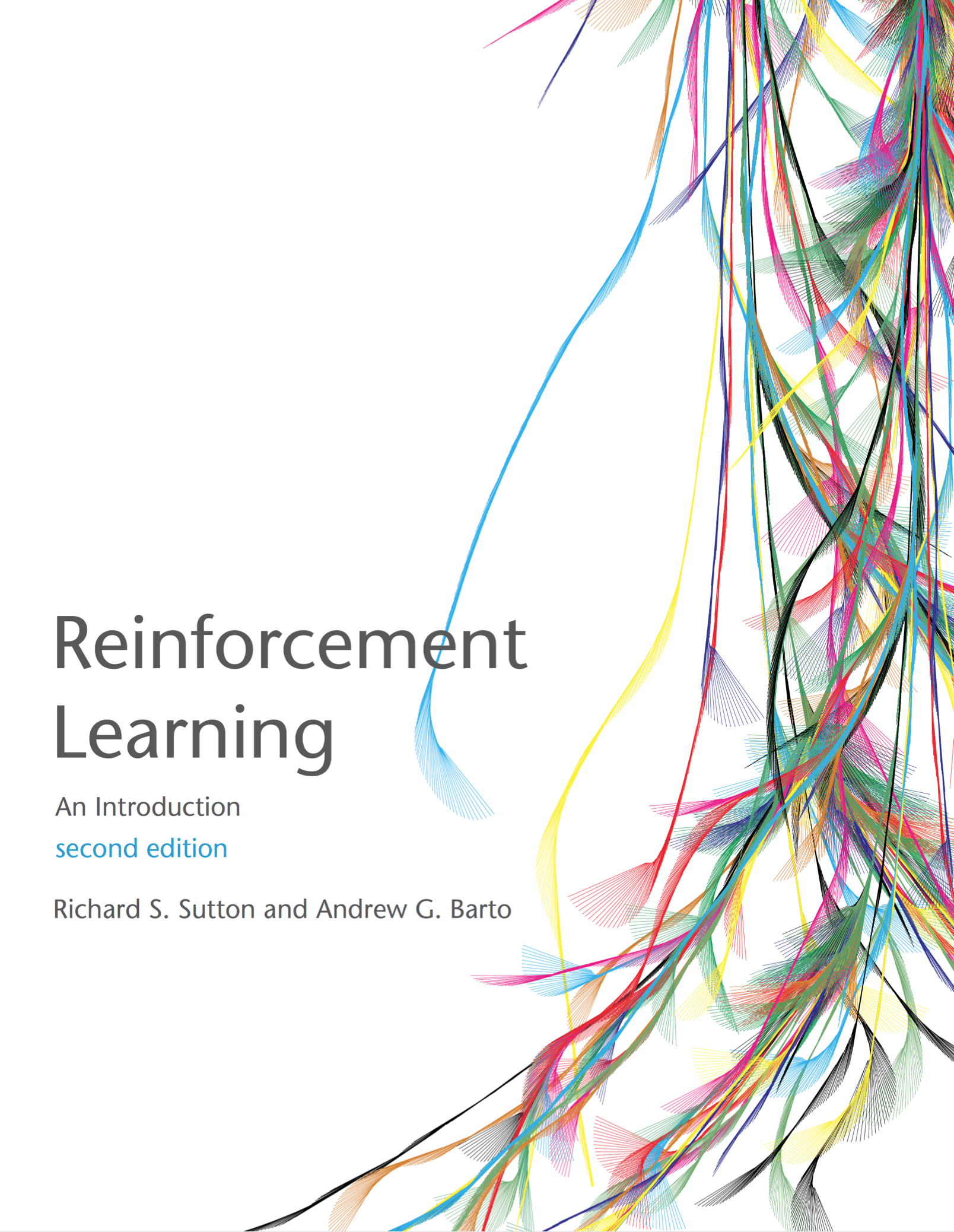 Reinforcement Learning profoundly changed my understanding of the science of happiness, biological evolution, human intelligence, and also gave me unique tactics for rapid skill acquisition in my personal life.

I wrote a full-length review of this book here: Book Review: Reinforcement Learning by Sutton and Barto

Below follows my detailed notes and summaries for each chapter.

Since tic-tac-toe strategy should be invariant under symmetry, we could amend the learning process to remember previously encountered states and map any newly encountered states that are symmetrically identical to the old states. This would make the agent more consistent, computationally simpler, but possibly give it fewer opportunities to perform exploratory moves because we’ve reduced the number of potential branching-off points. If the opponent did not take advantage of symmetries, it may not be beneficial for us to do so because we could exploit the opponent’s lack of symmetry by forcing it into a mirrored position where it would play more poorly than usual.

The main problem with greedy play is that it will get stuck at local maximums. Greedy players will likely play worse, because few real-life problems can be solved optimally with a greedy strategy, otherwise the problem would be trivial. It requires no talent to do just the most obvious thing at every step. For tic-tac-toe in particular, it’s possible that greedy play is optimal only because the game itself is not that complicated.

Domain knowledge of the game lets us manually tune rewards to help the agent find better strategies, for example giving small rewards for two Xs in a row. It seems there is a trade-off between how much manual tuning you do and the agent’s performance.

Trade-offs between exploration and exploitation

What happens as the delay increases between penalty and reward?

Or the converse: In option theory selling insurance

As \(n\) increases, does it increase exponentially?

It could be argued that humans are also not good at non-greedy payoffs for large \(n\). Consider the classic example of dieting for weight loss. We could achieve a large reward if we could only avoid eating cake every day, but alas, this reward is distant in the future so that the small near-term reward of eating cake derails our goal of long-term weight loss.

In the long run I would expect the \(\epsilon=0.01\) method to perform the best, because while it will take longer to find the optimal arm, once it finds the optimal arm it will deviate away from it much less than the other strategies. When the long run is very long, then how long you can exploit matters much more than how much time you ‘waste’ on exploring.

Seems similar to technical analysis stock trading, where you keep track of a moving average and then “buy” (pull the arm) whenever your estimated reward exceeds the moving average, or “sell” (switch arms) otherwise. See SMA on Investopedia

Same as using a simple moving average, except it’s exponentially weighted, again just like in technical analysis stock trading, for the same reason (recent information is likely to be more important than old information). See EMA on Investopedia

\(\bar{o}_n\) is recursively defined in terms of \(\alpha(1-\bar{o}_{n-1})\), so the higher order terms (less recent steps) will get multiplied more often (exponentially), making it recency-weighted without initial bias.

I think of this like the information gain ratio in decision trees. epsilon-greedy algorithms explore indiscriminantly, but what we would optimally like to do is favor exploring the arms that would maximize entropy (i.e. explore arms with the lowest information to gain the most information). The information theory perspective intuitively explains why we need natural log in the equation, because entropy is the negative log of the probability mass function.

Is this related to the optimal stopping problem, or the secretary problem? We can think of the secretary problem as a specific case of the \(k\)-armed bandit problem, except each arm can only be pulled once, you are only allowed to keep the reward from the last arm you pulled, and \(k=\) the number of candidates applying for the job.

I am surprised the book doesn’t talk more about the Gittins index, I read about it in the book Algorithms to Live By by Brian Christian and Tom Griffiths, and although there are lots of strong assumptions that need to be true for it to work (like the geometric discounting, assuming zero cost of switching, rewards being a constant fraction of the previous one), it has the advantage that you can just pre-compute a huge table for your problem and then your agent just needs to do a simple table lookup when taking its actions, potentially saving valuable time in an realtime interactive environment when the agent is deployed. It seems more suitable for a memory/speed tradeoff situation where you can afford lots of memory but not clock cycles. I’d like to know if there’s more research into whether the Gittins index approach will work better for this kind of situation.

I think goal-directed learning works only if there is a strong feedback loop between actions, states, and rewards. Otherwise if the environment is chaotic, behaves highly non-deterministically, or subject to non-rational behavior, then I don’t think MDP will work even if the problem can be fully specified in terms of actions, states, and rewards. Some examples are picking winning lottery numbers, telling a funny joke (e.g. measuring volume of laughter), day trading on the stock market, chasing a tornado.

There is a saying in philosophy, “The map is not the territory, but you can’t fold up the territory and put it in your pocket”, and “all maps are wrong, but some maps are useful”. Thus, I would argue that there is a “correct” place to draw the line between the agent and the environment, and the basis of this preference is the usefulness of the resulting model. Defining the driving task where actions represent tire torque is like a map that is too small, your actions are extremely precise but your policy needs to be extremely complicated to compensate for the fact that you’ll have a vastly enlarged state space to consider (is a torque of 100 Nm too much or too little? Depends on if you are speeding up or slowing down, if there’s ice out, how heavy is the car, the gear ratio of your transmission, etc.) and it’s impactical to obtain that much sensor data, even if you had the computational resources. Defining the driving task where actions represent muscle twitches is like a map that is too big, only a tiny subset of all possible muscle twitches will actually move a car forward, your actions are extremely imprecise (most actions result in flailing around) even though you have available to you vastly more possible ways of achieving your goal (you could use the same muscle twitches to fly a plane, attaining the goal faster and achieving a higher reward), but the vast amount of computing power you’d have to burn to do this makes it impactical. Thus, defining the driving task as “accelerator, steering wheel, and brake” is the most natural way to define the task because this is the most practical, and therefore most useful way to model the problem.

The robot needs to also get a negative reward for each unit of time it spends in the maze without escaping, to incentivize it to find the exit faster. Otherwise it can take as long as it wants to find the exit, which may be a very long time. Alternatively, you can treat it as a continuing task and discount the final reward to incentivize speedy completion.

TD updates are likely to be much better initially when you move to a new building because most of the state-value and action-value functions are the same, so the TD estimates based on those are already highly accurate, and it only needs to update its “last mile” estimations for the new building.

I think larger fixed values for alpha will lead to worse performance because you are giving more weight to each specific reward encountered, which increases the variance of the whole thing and making it less likely you’ll converge in the long-run, even if you have better improvement in the beginning. This could be mitigated by having larger values of alpha at first and then gradually tapering off and reducing alpha over time.

I think it’s considered off-policy because it tries to estimate the optial action-value function independent of the policy being followed.

Yes, I think this would make Q-learning the same algorithm as Sarsa because they both will pick the maximum estimate for the action-value function. Given they will be picking the same actions under the same action selection criteria, it follows that the updates will also be the same.

MCTS is an online, incremental sample-based algorithm for value estimation and policy improvement. It iteratively grows a lookup table for a partial action-value function, with estimated values of state-action pairs visited along high-yielding sample trajectories. If you can pick a better initial policy, and a better rollout policy, you can improve MCTS, because the rollout policy needs to be cheap to compute to simulate lots of trajectories, and it informs what action MCTS should take.

Blocking: Failing to learn a response when a potential conditioning signal is presented with another one that was previously used to condition the animal. Like taking a “shortcut” by associating only the first signal and not the second.

Second-order conditioning: Presenting a black square accompanying a metronome, but not following food. Pavlov’s dog salivated in response to the black square even though it never followed food (as the metronome had). This is similar to the TD model of classic conditioning via the bootstrapping idea.

Law of Effect: Cats placed in a puzzle box will try actions randomly until they accidentally push a bar that allows them to escape. The next time they’re put in the box they will immediately push teh bar. Reinforcement learning also combines serach (selection, trying alternatives) and memory (assocative, the chosen alternatives are associated with states to form the policy) to solve a task.

Is animal exploration “absolutely random, blind groping” or is there guidance from prior learning, reasoning, or otherwise deliberate exploration? This is subject to controversy.

RL can trade-off between random and deliberate exploration, for example in \(\epsilon\)-greedy or UCB algorithms.

Credit-assignment problem for learning systems: There can be a huge number of decisions that went into producing a reward, many of them spurious. Which decisions were actually important? RL resolves this by using eligibility traces, and also TD methods to learn value functions.

Stimuli leave traces in an animal’s nervous system that persists (but weakens over time), which is the analogy driving the eligibility trace.

Model-based RL are like “cognitive maps” in psychology, where we explicitly try to model the environment, e.g. using a state-transition function or a state-value function.

This is like RL’s distinction between model-free and model-based algorithms. Model-free algorithms make decisions by accessing information that has been stored in a policy or an action-value function, whereas model-based methods select actions as the result of planning ahead using a model of the agent’s environment.

Mastering the Game of Go