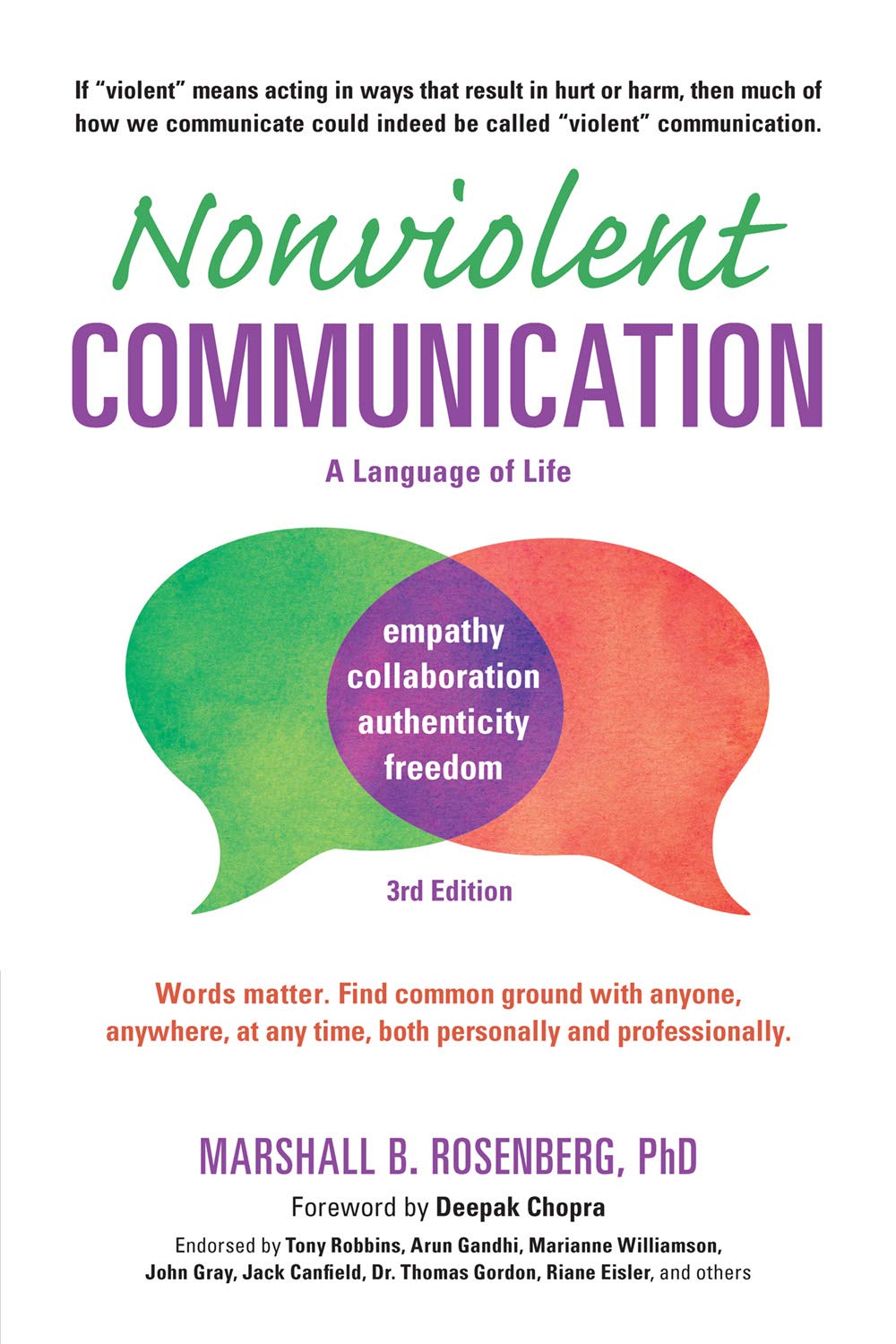 Nonviolent Communication: A Language of Life: Life-Changing Tools for Healthy Relationships by Marshall B. Rosenberg

It’s no understatement to say that putting NVC into practice has radically changed my life. Emotionally intelligent conversation skills are the bedrock of happy, fulfilling relationships and this book shows you how to build those skills. If NVC were required reading for everyone, everywhere, how many conflicts, callous affronts, and insensitive insults could be avoided. We would be a much more understanding, equanimous, respectful species.

It’s important to listen to your feelings not because the feelings themselves matter (they don’t, because they are fleeting), but because the emotions are a signal for something deeper that you should pay attention to.

Life-alienating communication both stems from and supports hierarchical or domination societies, where large populations are controlled by a small number of individuals to those individuals, own benefit. It would be in the interest of kings, czars, nobles, and so forth that the masses be educated in a way that renders them slavelike in mentality. The language of wrongness, should, and have to is perfectly suited for this purpose: the more people are trained to think in terms of moralistic judgments that imply wrongness and badness, the more they are being trained to look outside themselves—to outside authorities—for the definition of what constitutes right, wrong, good, and bad. When we are in contact with our feelings and needs, we humans no longer make good slaves and underlings.

“Our language is an imperfect instrument created by ancient and ignorant men. It is an animistic language that invites us to talk about stability and constants, about similarities and normal and kinds, about magical transformations, quick cures, simple problems, and final solutions. Yet the world we try to symbolize with this language is a world of process, change, differences, dimensions, functions, relationships, growths, interactions, developing, learning, coping, complexity. And the mismatch of our ever-changing world and our relatively static language forms is part of our problem.”

Our attention is focused on classifying, analyzing, and determining levels of wrongness rather than on what we and others need and are not getting. Thus if my partner wants more affection than I’m giving her, she is “needy and dependent.” But if I want more affection than she is giving me, then she is “aloof and insensitive.” If my colleague is more concerned about details than I am, he is “picky and compulsive.” On the other hand, if I am more concerned about details than he is, he is “sloppy and disorganized.”

Comparisons are a form of judgment.

The first one displays full-length pictures of a man and a woman who embody ideal physical beauty by contemporary media standards. Readers are instructed to take their own body measurements, compare them to those superimposed on the pictures of the attractive specimens, and dwell on the differences.

Since physical beauty is relatively superficial, Greenburg next provides an opportunity to compare ourselves on something that matters: achievement. He turns to the phone book to give readers a few random individuals to compare themselves with. The first name he claims to have pulled out of the phone book is Wolfgang Amadeus Mozart. Greenburg lists the languages Mozart spoke and the major pieces he had composed by the time he was a teenager. The exercise then instructs readers to reflect on their own achievements at their current stage of life, to compare them with what Mozart had accomplished by age twelve, and to dwell on the differences.

When we simply express our feelings, it may not be clear to the listener what we want them to do.

Depression is the reward we get for being “good.”

“I HAVE NEVER SEEN A TRAIN GO SO SLOW IN ALL MY LIFE!” The wife’s patience was clearly exhausted as she snapped back angrily, “Well, what do you want me to do about it? Get out and push?” Now there were two people in pain!

Requests may sound like demands when unaccompanied by the speaker’s feelings and needs.

In the above exchange, the wife heard the husband’s frustration but was clueless as to what he was asking for. Equally problematic is the reverse situation—when people state their requests without first communicating the feelings and needs behind them. This is especially true when the request takes the form of a question. “Why don’t you go and get a haircut?” can easily be heard by youngsters as a demand or an attack unless parents remember to first reveal their own feelings and needs: “We’re worried that your hair is getting so long it might keep you from seeing things, especially when you’re on your bike. How about a haircut?”

It is more common, however, for people to talk without being conscious of what they are asking for. “I’m not requesting anything,” they might remark. “I just felt like saying what I said.” My belief is that, whenever we say something to another person, we are requesting something in return. It may simply be an empathic connection—a verbal or nonverbal acknowledgment, as with the man on the train, that our words have been understood.

The clearer we are about what we want, the more likely it is that we’ll get it.

It’s a request if the speaker then shows empathy toward the other person’s needs.

How to not respond empathetically to a request:

After observing, feeling, needing, and requesting, we can paraphrase to confirm if we have accurately received the other party’s message.

How and when do we interrupt a dead conversation to bring it back to life? I’d suggest the best time to interrupt is when we’ve heard one word more than we want to hear. The longer we wait, the harder it is to be civil when we do step in. Our intention in interrupting is not to claim the floor for ourselves, but to help the speaker connect to the life energy behind the words being spoken.

Anger as a signal for needs

To fully express anger requires full consciousness of our need. In addition, energy is required to get the need met. Anger, however, co-opts our energy by directing it toward punishing people rather than meeting our needs. Instead of engaging in “righteous indignation,” I recommend connecting empathically with our own needs or those of others. This may take extensive practice, whereby over and over again, we consciously replace the phrase “I am angry because they…” with “I am angry because I am needing…” Use anger as a wake-up call.

I’m telling myself that they have no respect for human beings; they are a bunch of cold, faceless bureaucrats who don’t give a damn about anybody but themselves! They’re a real bunch of…

Marshall, I need the training I was requesting. If I don’t get that training, as sure as I’m sitting here, I’m gonna end up back in this prison when I get out.

All violence is the result of people tricking themselves, as did this young man, into believing that their pain derives from other people and that consequently those people deserve to be punished.

We recall four options when hearing a difficult message:

Listen to what people are needing rather than what they are thinking.

“Are you feeling frustrated?” I asked. “It appears that you might have had some bad experiences with Jewish people.”

He eyed me for a moment. “Yeah! These people are disgusting. They’ll do anything for money.”

“You feel distrust and the need to protect yourself when you’re involved in financial affairs with them?”

“That’s right!” he exclaimed, continuing to release more judgments, as I listened for the feeling and need behind each one.

When I hear that he’s scared and wants to protect himself, I recognize how I also have a need to protect myself and I too know what it’s like to be scared. When my consciousness is focused on another human being’s feelings and needs, I see the universality of our experience.

After nearly ten minutes of my just listening, he stopped: he had felt understood.

Then I let him know what was going on in me:

MBR: You know, when you first started to talk, I felt a lot of anger, a lot of frustration, sadness, and discouragement, because I’ve had very different experiences with Jews than you’ve had, and I was wanting you to have much more the kind of experiences I’ve had. Can you tell me what you heard me say?

MBR: Excuse me, hold on, hold it. Can you tell me what you heard me say?

Man: What are you talking about?

MBR: Let me repeat what I’m trying to say. I really want you to just hear the pain I felt when I heard your words. It’s really important to me that you hear that. I was saying I felt a real sense of sadness because my experiences with Jewish people have been very different. I was just wishing that you had had some experiences that were different from the ones you were describing. Can you tell me what you heard me say?

Man: You’re saying I have no right to talk the way I did.

MBR: No, I would like you to hear me differently. I really don’t want to blame you. I have no desire to blame you.

Our need is for the other person to truly hear our pain.

I intended to slow down the conversation, because in my experience, to whatever degree people hear blame, they have failed to hear our pain. If this man said, “Those were terrible things for me to say; those were racist remarks I made,” he would not have heard my pain. As soon as people think that they have done something wrong, they will not be fully apprehending our pain.

People do not hear our pain when they believe they are at fault.

I didn’t want him to hear blame, because I wanted him to know what had gone on in my heart when he uttered his remark. Blaming is easy. People are used to hearing blame; sometimes they agree with it and hate themselves—which doesn’t stop them from behaving the same way—and sometimes they hate us for calling them racists or whatever—which also doesn’t stop their behavior. If we sense blame entering their mind, as I did in the cab, we may need to slow down, go back, and hear their pain for a while more.

The first question is: What do I want this person to do that’s different from what he or she is currently doing? If we ask only this first question, punishment may seem effective, because the threat or exercise of punitive force may well influence someone’s behavior. However, with the second question, it becomes evident that punishment isn’t likely to work: What do I want this person’s reasons to be for doing what I’m asking?

The limits of psychotherapy

I thus began to experiment by replacing clinical language with the language of NVC. Instead of interpreting what my clients were saying in line with the personality theories I had studied, I made myself present to their words and listened empathically. Instead of diagnosing them, I revealed what was going on within myself.

I empathized with clients instead of interpreting them; I revealed myself instead of diagnosing them.

Expression appreciation of people in a life-affirming way

Receiving appreciation in a life-affirming way

Conventional compliments often take the form of judgments, however positive, and are sometimes intended to manipulate the behavior of others. NVC encourages the expression of appreciation solely for celebration. We state (1) the action that has contributed to our well-being, (2) the particular need of ours that has been fulfilled, and (3) the feelings of pleasure engendered as a result.

When we receive appreciation expressed in this way, we can do so without any feeling of superiority or false humility—instead we can celebrate along with the person who is offering the appreciation.

When needs are met

When needs are not met