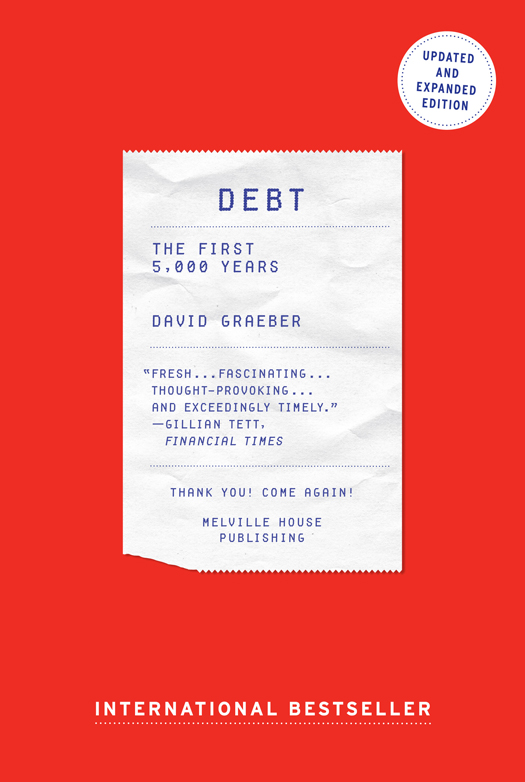 This book is a first-principles account of how monetary systems function.

1. On the Experience of Moral Confusion

“Debt” is both a moral concept as well as a financial concept.

Palladium Magazine: Collapse Won’t Reset Society. Elite power structures are surprisingly resilient to catastrophic collapse, and the historical norm is they tend to continue even under apocalyptic conditions.

the remarkable thing about the statement “one has to pay one’s debts” is that even according to standard economic theory, it isn’t true. A lender is supposed to accept a certain degree of risk.

“Surely one has to pay one’s debts.”

The reason it’s so powerful is that it’s not actually an economic statement: it’s a moral statement. After all, isn’t paying one’s debts what morality is supposed to be all about? Giving people what is due them. Accepting one’s responsibilities. Fulfilling one’s obligations to others, just as one would expect them to fulfill their obligations to you.

2. The Myth of Barter

Money started as “I owe you one” of reciprocal aid between neighbours. In other words, money first started as debt, not as coinage or barter. Jared Diamond also points this out in The World Until Yesterday.

As societies grow, keeping track of who owns whom is easier to do in written ledgers (e.g. babylonian tablets). Later, to trade debts to other parties, it is the state that introduces coinage to formalize these debts, so that bearer tokens could be traded to outsiders (who are not part of the in-group society, and so to whom credit could not be extended).

Coinage is the catalyst of markets; controlling the money supply compels the rest of society to create supply for the people who receive the newly minted money.

Say a king wishes to support a standing army of fifty thousand men. Under ancient or medieval conditions, feeding such a force was an enormous problem. Such a force would likely consume anything edible within ten miles of their camp in as many days; unless they were on the march, one would need to employ almost as many men and animals just to locate, acquire, and transport the necessary provisions. On the other hand, if one simply hands out coins to the soldiers and then demands that every family in the kingdom was obliged to pay one of those coins back to you, one would, in one blow, turn one’s entire national economy into a vast machine for the provisioning of soldiers, since now every family, in order to get their hands on the coins, must find some way to contribute to the general effort to provide soldiers with things they want. Markets are brought into existence as a side effect.

Formalized debt as a form of class warfare, as “I owe you one” between equals is more about casual gifting instead of precise tabulating of accounts. It would be like trying to send your friend to debt collection for refusing to pay you back for dinner.

To be a slave, or lower caste, is to be intrinsically inferior. These are relations of unadulterated hierarchy. In the case of debt, we are talking about two individuals who begin as equal parties to a contract. Legally, at least as far as the contract is concerned, they are the same.

We can add that, in the ancient world, when people who actually were more or less social equals loaned money to one another, the terms appear to have normally been quite generous.

5. A Brief Treatise on the Moral Grounds of Economic Relations

Debts do not necessarily have to be repaid, because repayment implies a cancellation of the relationship. If you wish to have an ongoing relationship with someone, you should have ongoing credit with each other.

6. Games with Sex and Death

Throughout much of history, women and slaves were used as forms of currency, but none of this was explained in the literature, as anthropologists of the time wouldn’t have felt compelled to explain the lives of oxen used for trade.

How is it that moral obligations between people come to be thought of as debts and as a result, end up justifying behavior that would otherwise seem utterly immoral?

To be a slave was to be plucked from one’s family, kin, friends, and community, stripped of one’s name, identity, and dignity; of everything that made one a person rather than a mere human machine capable of understanding orders.

7. Honor and Degradation, or, On the Foundations of Contemporary Civilization

What starts as a human economy gets replaced by a commercial economy, where money acts as a social currency, when it initially creates relationships between people, it ends up severing relations between them.

it is the peculiar quality of such social currencies that they are never quite equivalent to people. If anything, they are a constant reminder that human beings can never be equivalent to anything—even, ultimately, to one another. This is the profound truth of the blood-feud. No one can ever really forgive the man who killed his brother because every brother is unique

Dehumanization happens when social currency is redeemed for commercial currency, because people are ripped from their social contexts entirely to resolve a unit of accounting.

8. Credit Versus Bullion, And the Cycles of History

For much of human history, then, an ingot of gold or silver, stamped or not, has served the same role as the contemporary drug dealer’s suitcase full of unmarked bills: an object without a history, valuable because one knows it will be accepted in exchange for other goods just about anywhere, no questions asked. As a result, while credit systems tend to dominate in periods of relative social peace, or across networks of trust (whether created by states or, in most periods, transnational institutions like merchant guilds or communities of faith), in periods characterized by widespread war and plunder, they tend to be replaced by precious metal.

Chapters 9-12 are a historical account of human and commercial economies of various civilization from 800 BC through 1971 AD and the present.

Jonathan Bi also has great notes on this book: johnathanbi.com/book-notes-summaries/debt