So Good They Can’t Ignore You: Summary and Review 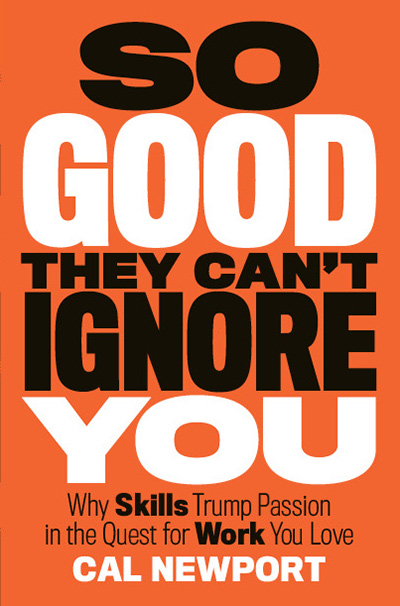 So Good They Can’t Ignore You: Why Skills Trump Passion in the Quest for Work You Love by Cal Newport

This book is directly responsible for my having a happy and fulfilling career today. That’s the highest possible praise anyone can lavish on a career book.

After reading this book, you will never look at traditional career advice the same way again. This book makes the vast majority of career books out there obsolete, as they often start with the assumption that the reader should “follow his/her passion” in order to be happy, which So Good They Can’t Ignore You argues will make you less happy in most cases.

The more I studied the issue, the more I noticed that the passion hypothesis convinces people that somewhere there’s a magic “right” job waiting for them, and that if they find it, they’ll immediately recognize that this is the work they were meant to do. The problem, of course, is when they fail to find this certainty, bad things follow, such as chronic job-hopping and crippling self-doubt.

In So Good They Can’t Ignore You, Cal Newport argues that “follow your passion” is bad advice for finding a job that you love. Newport argues that passion is something you cultivate through mastery of a skill, and not a pre-existing trait. He contrasts this passion mindset with what he calls the craftsman mindset, where instead of focusing on the activities that will maximize your happiness, you focus on the activities that will maximize how much value you can produce in your job. If you can effectively create value for other people you will become “so good they can’t ignore you”, and you will be able to leverage your accumulated skills (he calls this career capital) to negotiate for items normally associated with job satisfaction, such as more autonomy and control.

Newport backs up his argument of “follow your passion is bad advice” with research: he uses data from research studies to support his position, and presents specific examples and counterexamples from interviews with real people to help the reader visualize his conclusions in action.

The book is divided into four sections, each section corresponding to four rules that Newport recommends you should apply to your career in order to find the best type of work for you:

Rules #1 and #2 are described above in the summary. Rule #3 states that control over your job is the single best factor that predicts job satisfaction, and warns against two control traps that prevent people from attaining more control.

The first control trap occurs when you try to bargain for more control over your career without sufficient career capital to support it. An example of this is a banker quitting her job to become a blogger, she has zero prior experience in blogging which makes it unlikely for her to succeed.

The second control trap occurs when you have sufficient career capital but lack the courage to overcome resistance. This is what most other career books advise about: a typical example is an investigative journalist who wants to quit his job to become a blogger. So Good They Can’t Ignore You sets itself apart from all other career books in this manner because it acknowledges both sides of the control trap: having courage to make a career switch isn’t necessarily a good thing, it can be dependent on whether you have developed enough career capital for others to recognize your expertise.

Rule #4 states that a source of career satisfaction can come from pursuing a mission to your work, when you work on a cause that benefits humanity; however, you should only try to find a mission once you have developed sufficient career capital in your field of expertise: any mission chosen before this point is unlikely to be sustainable because you lack the skills required to create real innovations in your field.