The Body Keeps the Score: Summary and Review 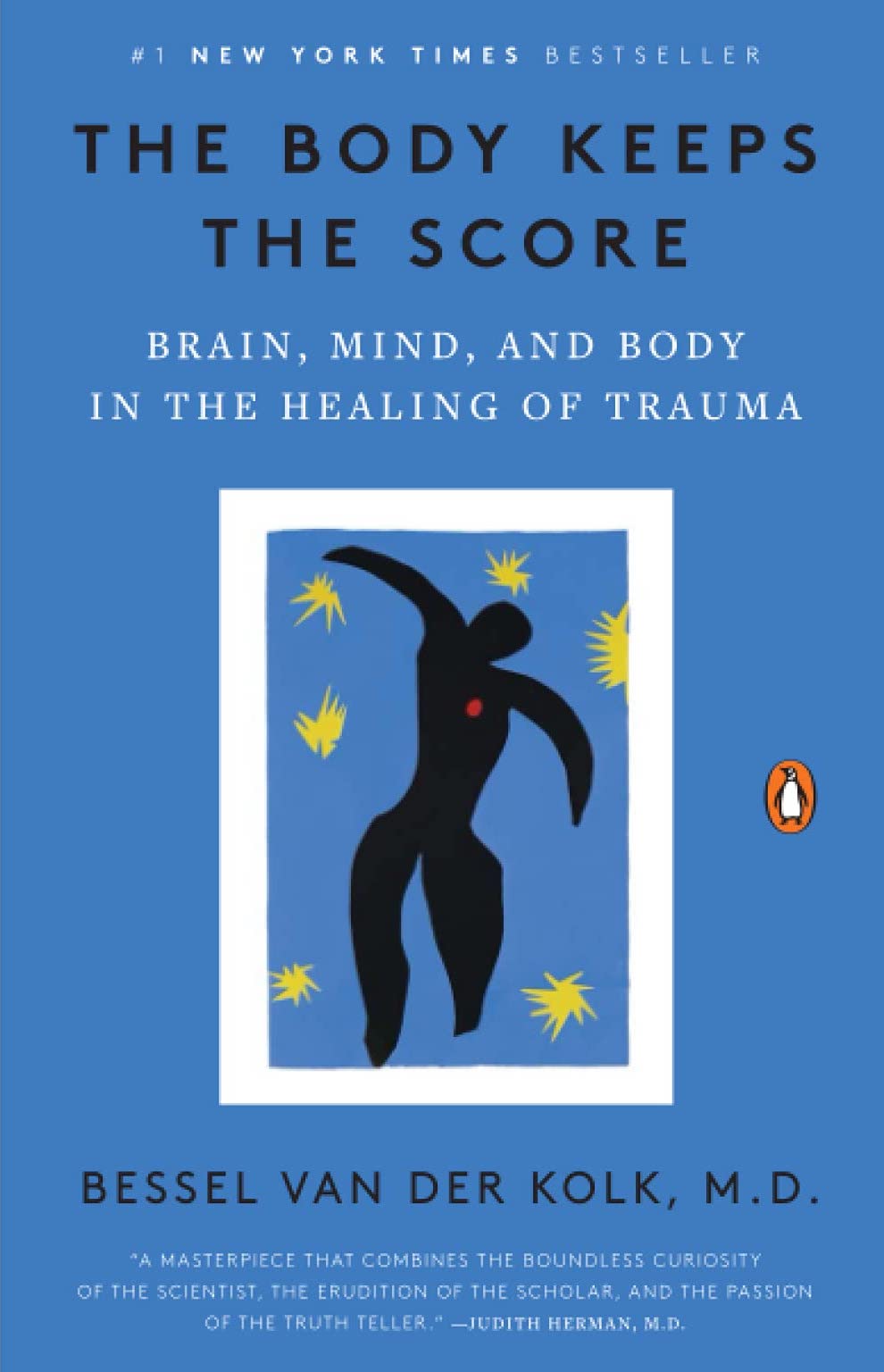 The Body Keeps the Score: Brain, Mind, and Body in the Healing of Trauma by Bessel van der Kolk

You may shy away from this book at first because of the scary word “trauma” on the cover. For me, it is not actually about trauma, but about how to live a life of joy, in the most unique perspective I’ve seen. The author writes about how he is heartened by how so many people can overcome their traumas and live happy productive lives. This is my biggest takeaway from the book.

A big insight for me was realizing why I like independence and empiricism, because societal trauma from dysfunctional and sclerotic institutions reflect my dad being stubborn and not open to new opinions when I was growing up.

The author recounts the experience of war veterans, and why former soldiers “shut down” in response to PTSD.

2. Revolutions In Understanding Mind And Brain

Medical science used to treat psychological diseases purely as chemical imbalances, totally ignoring the context and circumstances that led to trauma, denying the patient the dignity of having their life history listened to and their narratives validated.

3. Looking Into The Brain: The Neuroscience Revolution

Trauma causes the brain’s speech centers to mostly shut down, which is why people often lack the vocabulary to talk about what happened.

4. Running For Your Life: The Anatomy Of Survival

Returning to normalcy after a trauma is important to surviving it. Children who witnessed 9/11 but were safe afterwards could come up with creative solutions and drawings again, dealing with the event with levity and play. Being unable to escape a trauma is far more harmful as it shuts down important emotion regulation areas of teh brain.

Depersonalization: People cope with traumatic experience by numbing themselves of all feeling

7. Getting On The Same Wavelength: Attachment And Attunement

People who faced trauma are hyper-sensitive to signs of anger, or circumstances similar to their traumatic experience.

8. Trapped In Relationships: The Cost Of Abuse And Neglect

This chapter follows the story of Marilyn and her experiences being the survivor of abuse.

Obesity and extreme promiscuity can be the result of coping mechanisms for trauma. Trying to treat obesity directly without understanding this will not get at the root problems.

One female rape victim told Felitti, “Overweight is overlooked, and that’s the way I need to be.” Weight can protect men, as well. Felitti recalls two guards at a state prison in his obesity program. They promptly regained the weight they had lost, because they felt a lot safer being the biggest guy on the cellblock.

Although widely understood to be harmful to health, each adaptation [such as smoking, drinking, drugs, obesity] is notably difficult to give up. Little consideration is given to the possibility that many long-term health risks might also be personally beneficial in the short term. We repeatedly hear from patients of the benefits of these ‘health risks.’ The idea of the problem being a solution, while understandably disturbing to many, is certainly in keeping with the fact that opposing forces routinely coexist in biological systems. . . . What one sees, the presenting problem, is often only the marker for the real problem, which lies buried in time, concealed by patient shame, secrecy and sometimes amnesia—and frequently clinician discomfort.

We spend millions of dollars on detainment and crime prevention, but many of these problems could have been prevented by better spending on public health:

Economists have calculated that every dollar invested in high-quality home visitation, day care, and preschool programs results in seven dollars of savings on welfare payments, health-care costs, substance-abuse treatment, and incarceration, plus higher tax revenues due to better-paying jobs.

12. The Unbearable Heaviness Of Remembering

“Repressed memory” is a controversial area of scientific research. Because traumatic memory works very differently from normal memory, it can cause memory loss in ways that can’t be studied or replicated in a lab.

Consider what is known as the “lost in the mall” experiment, for example. Academic researchers have shown that it is relatively easy to implant memories of events that never took place, such as having been lost in a shopping mall as a child. About 25 percent of subjects in these studies later “recall” that they were frightened and even fill in missing details. But such recollections involve none of the visceral terror that a lost child would actually experience.

Memory loss has been reported in people who have experienced natural disasters, accidents, war trauma, kidnapping, torture, concentration camps, and physical and sexual abuse. Total memory loss is most common in childhood sexual abuse, with incidence ranging from 19 percent to 38 percent. This issue is not particularly controversial: As early as 1980 the DSM-III recognized the existence of memory loss for traumatic events in the diagnostic criteria for dissociative amnesia: “an inability to recall important personal information, usually of a traumatic or stressful nature, that is too extensive to be explained by normal forgetfulness.” Memory loss has been part of the criteria for PTSD since that diagnosis was first introduced.

The fundamental problem is this: Events that take place in the laboratory cannot be considered equivalent to the conditions under which traumatic memories are created. The terror and helplessness associated with PTSD simply can’t be induced de novo in such a setting.

Interestingly, once the excitement and profitability of courtroom testimony diminished, the “scientific” controversy disappeared as well, and clinicians were left to deal with the wreckage of traumatic memory.

13. Healing From Trauma: Owning Your Self

“Trauma robs you of the feeling that you are in charge of yourself”, and the important part of healing from trauma is learning how to integrate their traumatic memories with a cohesive story and take back control of their life narrative.

A different problem arises when trauma victims themselves become literally speechless—when the language area of the brain shuts down. I have seen this shutdown in the courtroom in many immigration cases and also in a case brought against a perpetrator of mass slaughter in Rwanda. When asked to testify about their experiences, victims often become so overwhelmed that they are barely able to speak or are hijacked into such panic that they can’t clearly articulate what happened to them. Their testimony is often dismissed as being too chaotic, confused, and fragmented to be credible.

Others try to recount their history in a way that keeps them from being triggered. This can make them come across as evasive and unreliable witnesses. I have seen dozens of legal cases dismissed because asylum seekers were unable to give coherent accounts of their reasons for fleeing. I’ve also known numerous veterans whose claims were denied by the Veterans Administration because they could not tell precisely what had happened to them.

Eye Movement Desensitization and Reprocessing (EDMR) to help re-create the traumatic experience, but in a safe environment, so the survivor can process the memories and move forward with their lives.

16. Learning To Inhabit Your Body: Yoga

Yoga demands that you be in full attention of your body, and forces you to stop numbing yourself of feeling, which is difficult and painful but allows people to fully come alive afterwards.

17. Putting The Pieces Together: Self-Leadership

Revisiting your childhood memories and coming to terms with what happened.

Then, after some time, I urged Peter to go back into the scene and take the boy away with him. Peter imagined himself confronting his dad as a grown man, telling him: “If you ever mess with that boy again, I’ll come and kill you.” He then, in his imagination, took the child to a beautiful campground he knew, where the boy could play and frolic with ponies while he watched over him.

One day he told me that he’d spent his adulthood trying to let go of his past, and he remarked how ironic it was that he had to get closer to it in order to let it go.

18. Filling In The Holes: Creating Structures

Support groups where people take turns roleplaying and standing in as the person who abused them, then alternate with an “ideal” figure instead, to allow the survivor to re-interpret the trauma in a safe environment.

Using electrodes to help people calm down, stop dissociating, and focus on the present.

As we’ve seen, the essence of trauma is feeling godforsaken, cut off from the human race. Theater involves a collective confrontation with the realities of the human condition. As Paul Griffin, discussing his theater program for foster-care children, told me: “The stuff of tragedy in theater revolves around coping with betrayal, assault, and destruction. These kids have no trouble understanding what Lear, Othello, Macbeth, or Hamlet are all about.” In Tina Packer’s words: “Everything is about using the whole body and having other bodies resonate with your feelings, emotions and thoughts.” Theater gives trauma survivors a chance to connect with one another by deeply experiencing their common humanity.