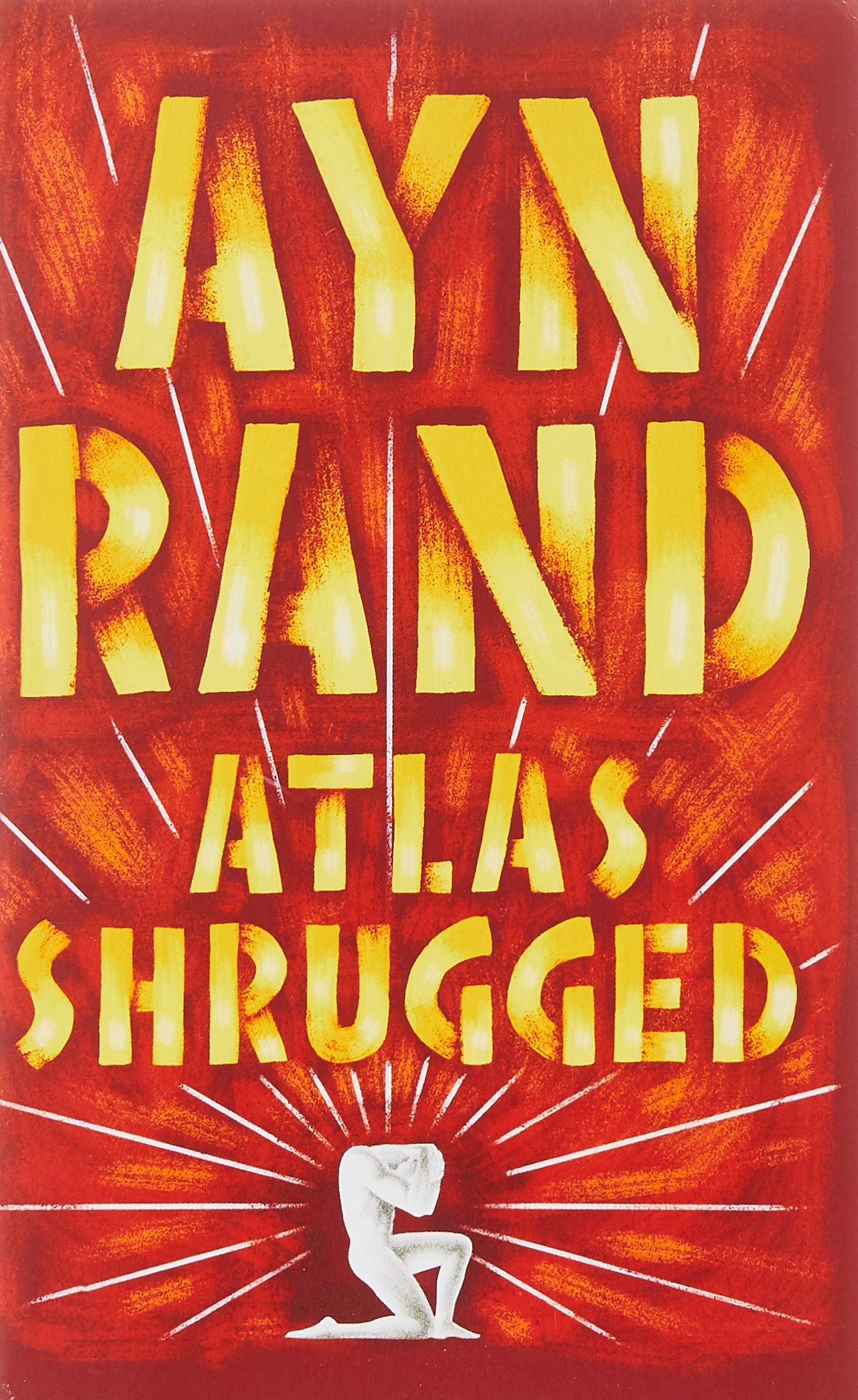 Most reviewers of Ayn Rand focus on politics, economics, or philosophy. Here, I discuss none of those things.

The book begins with the premise that the first amendment to the Constitution of the United States (right to free speech) as an inalienable human right. The rest of the book takes this premise a further step to argue that economic freedom is also part of fundamental freedom, on par with the first amendment. Judge Narragansett amends the U.S. constitution at the end of the book to include “Congress shall make no law abridging the freedom of production and trade…” The impassioned debate about this thesis is what makes Atlas Shrugged notorious.

But is the second amendment (right to bear arms) an inalienable human right on par with the first amendment?

Atlas Shrugged ignores this question; the book doesn’t touch on the second amendment at all and basically presupposes that it is self-evident. In 1950s America, when Atlas Shrugged was published, a right to bear arms may well have been widely accepted; indeed, the book’s backdrop of railways, steel, and copper mines sets up an environment upon which the importance of guns in securing the frontier is clear.

However, to me the most interesting part about guns in the book is how Ayn Rand does not conceive of the gun inside the traditional American idea that guns are tools that unlock freedom for whoever bears them. Instead, Rand’s conception of the gun more closely matches a Japanese worldview that guns are an embodiment of the power that comes from attaining self-actualization.

I got this idea from an excellent Extra Credits video: The Myth of the Gun. To summarize it:

Atlas Shrugged portrays guns as extensions of the characters using them, rather than symbols in and of themselves.

For the looters, a gun is merely a tool to help them extort something they want. For the producers, the gun is an extension of the self, almost as if each bullet comprised the physical manifestation of the strength of the bearer’s will.

We see this play out in the rescue of John Galt: it’s almost as if it didn’t matter whether Hank Rearden was projecting words or bullets at the guards—the ultimate effect was the same. Conversely, neither the guard’s words nor bullets manage to kill him, as the force of Rearden’s will is inpenetrable. Ayn Rand makes the word/bullet association concrete during Hank Rearden’s trial: “I will not help you to preserve an appearance of rationality by entering a debate in which a gun is the final argument”.

In this conception, guns do not endow you with powers you did not previously have, but instead are mirrors that reveal the inherent goodness (or badness) of your true colours. In Atlas Shrugged, a looter can never use a gun for good, and a producer can never use a gun for bad. In this weird sort of way, the book stands against the traditional American idea of freedom as applied to the second amendment, because you cannot change who you are on the inside by using a gun. Keep this in mind for later in this essay.

The meatiest parts of the book are the relationships. Atlas Shrugged writes in extensive depth about a large number of characters. Four characters have entire chapters devoted to them: Dagny Taggart, Hank Rearden, Francisco D’Anconia, and John Galt. Ayn Rand wrote more about Dr. Robert Stadler than J.K. Rowling wrote about Voldemort, and Stadler isn’t even a “major” character.

I think of Dagny Taggart as the main character of the book (and not John Galt, even though he is traditionally seen as the “hero” of the novel), because all the relationships in the book eventually center on her. Ayn Rand may have also been indulging herself through Dagny’s character by having her pursued by three, extremely confident, strong-willed men. How awesome of a sexual fantasy it must be for her to be desired by three very attractive men all vying for her love?

In this way, sex is about congruence, about being true to yourself and your values in all aspects of your life: business, family, friendship, and sex. The book highlights the idea that good sex cannot come about unless there is some deepness of connection in the relationship that is aligned with both partners’ values on all levels.

It is then ironic and instructive to study Ayn Rand’s relationship with Nathaniel Branden. In The Six Pillars of Self-Esteem, Branden writes:

Only gradually did I realize that she did not tolerate disagreement well. […] I did not notice the steps by which I learned to censor negative reactions to some of her behavior—when, for example, I found her self-congratulatory remarks excessive or her lack of empathy disquieting or her pontificating unworthy of her. […]

I often reflected on why I did not speak up more often—I who was (at least relatively) freer with her than anyone else in our circle. The simple truth was, I valued her esteem too much to place it in jeopardy. I had, in effect, become addicted to it. […]

I was relating to an abstraction, the author of The Fountainhead and Atlas Shrugged, rather than to the concrete woman in front of me. I did not confront the fact that her agenda was very different from mine and that she was totally absorbed in her own needs.

Hank and Dagny’s relationship is in some sense impossible, that two people could be equally perfect and relate to each other on equal terms. In real life, nobody can be so sure of their own high position, as any idea that you completely deserve a man or woman of such perfect stature would require you to lack any humility whatsoever. A real Dagny or Hank would not look up to the other in respect, but instead in deification.

The book goes to great lengths to glorify “men of ability”, but it does nothing to advise on how men can go about acquiring this ability. Of course, there’s the implicit refrain of persistence and hard work found in the description of Galt’s laboratory as a child of raw labour; but raw labour is not enough to gain ability. The book does not mention the possibilities on the path to ability, and assumes that ability is essentially fixed.

This is most clear in the final scene with Eddie Willers, as we witness his transformation into a person with spiritual tenacity. However, his transformation is merely a philosophical one, as he remains intellectually impotent and lacking the ability to repair the Comet. If truly the only great men are those with ability, how come there are no characters who attain ability from humble beginnings?

Every able person comes from a background of privilege, either being able to afford the decedancies of a university, or received schooling as the progeny of an established industrial family with a famous last name like Taggart or D’Anconia.

The closest character we have to someone coming from humble beginnings is John Galt, but even then his purpose in the book is not to be celebrated as a cleantech innovator, but to be worshipped as a Messianic figure. Describing John Galt as an inventor is like describing Jesus Christ as a carpenter.

The book’s heroes have their abilities endowed by God, not built up through actual ability. You are not allowed to become Jesus by improving yourself. To claim to be able to do so is blasphemy.

In the end, Atlas Shrugged’s greatest failure is that its conception of the man of ability is flawed in that ability alone cannot account for the composition of a man’s moral character in the face of the randomness of life.

I think this is what Ayn Rand refers to in her afterword when she tells us that her critics say the characters can’t possibly exist. The characters are inherently impractical because they are too perfect. John Galt’s only flaw is that he has no flaws.

You could look at the book as an example of perfection to strive toward in your personal life. Instead of asking “What would Jesus do”, ask “What would Hank Rearden do?” But using Atlas Shrugged as your moral compass would be making the mistake of generalizing from fictional evidence. You’d be taking the book too seriously to use it as a holy text, and it prevents you from learning from the things that you think are useful and ignoring everything else.

Unregulated capitalism has a tendency toward environmental damage for the sake of lowering internal costs, but more importantly, I think the book isn’t even pro-capitalism, as to me Atlas Shrugged is ultimately a book devoid of freedom.

The beauty of a market economy is that it encourages people who strive to push forward the engine of progress by promising the American Dream as a reward for anyone who invests their effort and mettle. But Atlas Shrugged’s characters live in an essentially static world—no man of inability ever gains ability and no man of ability ever loses it—not even a gun grants you a freedom you didn’t have before. Without a means for the everyman to build a better future, the book fails to harness the best part of capitalism.

Atlas Shrugged is merely a paean for those who already have ability, not an absolution for those of inability who are striving to become better. It is for this reason that Atlas Shrugged falls flat for me. I think it is the latter book that Ayn Rand should have written instead.

This review was originally published on August 9, 2013.