A Flood of Luck

I sat on a bench and watched as the water dripped from the ceiling of the subway tunnel into a puddle that was slowly growing. I heard a thunderclap outside. A beam of electricity must have touched a transformer box because a half-second later I found myself bathed in complete darkness.

The lights came back, but I wasn’t soothed until the hum of the ventilation fan came back too. This time, the escalators didn’t wake up. Ahh, I just want to go home.

The train approached the station, and I helped a woman and her 3-year old kid board with a stroller before I found a spot to sit down. I tried to ignore how slowly we were lumbering in the tunnel by hiding behind a book. That is, until we stopped. Then the lights expired.

The ventilation fan started again. This time, the lights didn’t wake up. I forced a joke to the man sitting across from me about throwing a party in the train while we waited for things to get moving again. He replied with a polite chuckle.

A strained voice crackled through the intercom when the lights returned:

Dear passengers on the Sheppard line, we just had a, uh, major failure with the, uh, electrical system here. Our entire system crashed and we’re trying to get things, uh, started again manually. I’m really sorry about the delay. We’re trying our best to get things moving again.

It took over an hour of staring at the grey wall of the subway tunnel before things got moving again. We arrived at the next station and were greeted with another announcement:

Hi everyone, this train is going to be stopping here. All passengers must exit now, and we’re taking this train out of service. Apologies for the inconvenience. There will be shuttle buses that can take you along Yonge St.

The line for the shuttle buses wrapped across the platform, around a corner, and down the stairs. I took a breath and exited the station instead.

Upon ascending into fresh air I received a Snapchat photo from a friend. The caption: “Massive flooding on my street!” The photo disappeared, along with the entire cell network. I looked up at the traffic lights, and the traffic lights’ blank faces looked back at me. Huge gobs of rain fell on my head. A crowd of people holding umbrellas piled out of a darkened McDonald’s whose arches were no longer golden.

I’m a 2-hour walk away from home, with no umbrella, and no friends nearby.

Well Bill, I said to myself, This is a great time to invent a solution, ya know? I walked to the street corner and started knocking on car windows until the driver responded, at which point I asked if I can share a ride with them. Surprisingly the majority of the drivers wanted to help me out, but just weren’t going in the same direction as I was. About a dozen cars later I met a middle-aged man who offered me a ride. His suit matched his car.

I introduced myself and told him about my situation. He was on his way back from work and was going to pick up his wife. He joked that he should have brought a swimsuit to the golf course.

We drove for less than 5 minutes before we stalled among a huge crowd of cars. A downed traffic light at a major artery is as bad as a blood clot. I proposed routing around on the highway—at least there wouldn’t be any traffic lights.

He replied, “No man! The highway runs right alongside a river. If this street is flooding the highway must be underwater. I’m going to take a detour through a side-street.” 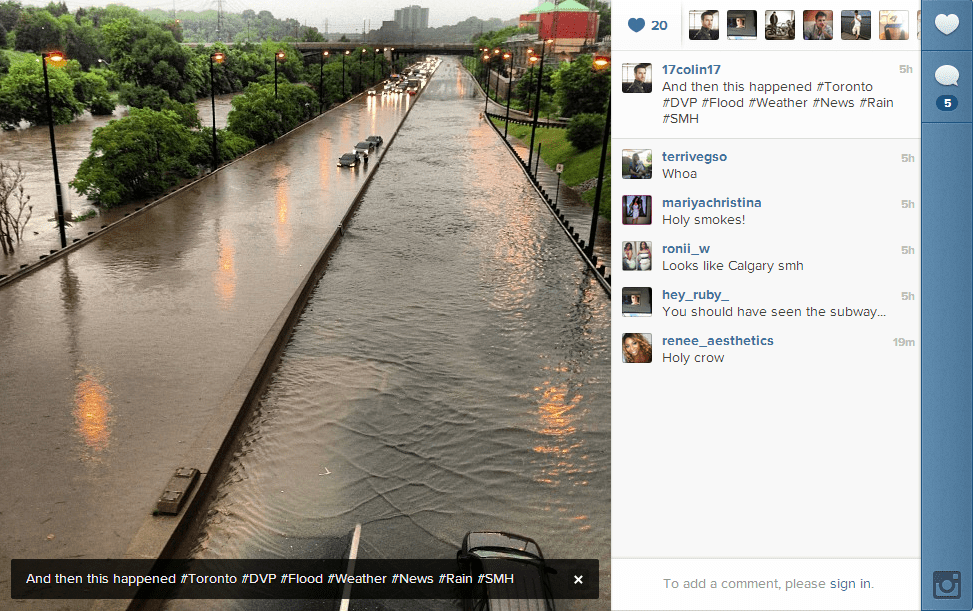 After some driving and chatting about the weather, we pulled into a gas station. He looked over and said:

“Alright kiddo, I’m heading out to the suburbs from here. How are you getting home?”

“It’s still pouring out. Here, you can have my umbrella.”

“No problem. Best of luck to you!”

“Thanks again for the ride!”

I stood under the gas station canopy and waved my arms around at drivers that approached. A lady waved back and asked me if the gas station was open. I told her I didn’t think so: the doors were locked and the lights were off.

“Argh, are you sure it’s closed? I just want a drink of water!”

“The pumps are out too. Doesn’t look like they can operate without power.”

Finally a pickup truck pulled into the station and the driver offered me a ride. I introduced myself and the guy said “You know, I don’t know if you’re as lucky as you think you are because I’m almost out of gas! I pulled in here thinking I could fill up but these pumps ain’t workin’. I’ll give you a ride anyway and we’ll see how far we can go.”

I thanked him and we started driving. It was obvious he worked for an insurance company; without prompting he said to me: “I had three condos downtown calling me today to tell me their sewers were backed up. Every goddamn thing is floodin’ and I gotta clean up this mess!”

We passed by one of the shuttle buses filled with people pressed against the windows, as the words “SORRY NOT IN SERVICE” scrolled across its display. It was the only shuttle bus we encountered during the entire trip. We passed by half a dozen fire engines and ambulances with wailing sirens. We also passed by a manhole that wanted a happier life as a fountain in the middle of the street.

After driving for a while, our truck began to have problems heading up a hill and quietly stalled. He fired up the engine again and barely got us rolling into another gas station. The man looked over and said:

“Well, looks like this baby’s outta gas. I’m going to stop here and wait for the power to come back on so I can refuel. Good luck on the rest of your journey.”

“Thank you! I’ll see how far I can walk from here. Good luck to you as well.”

I dodged puddles for the next few blocks before I looked up and noticed a working traffic signal. This was great news! The power must be back in this neighbourhood which meant that the subway must be operational too.

I entered the first station I encountered and an automated voice belched information at me:

That’s like half the city and most of the suburbs. A guy I was standing beside asked me if there was any way he could make it to Bloor Station. It happened to be the same one I was going to.

“Yeah it seems like it,” I said, as I examined the route map, “I’m heading there too. Looks like we got lucky: they’ve shut down everything south of Bloor but we’re heading inbound instead.”

“Ahh, great,” he said, “dude, I just came from watching this zombie apocalypse movie. This is so surreal right now.”

We boarded the next train and started chatting about what we had to deal with so far. People around us started getting drawn into the conversation and the next thing I knew each of us were sharing stories about our struggles to get home. There was something about disrupting the normal humdrum of life that brought us together as a community. We reminisced about the 2003 Blackout. It was like having a party in the train car. I swear if the ride went on for a little longer we probably would have been singing campfire songs.

As we approached my station I eavesdropped on a conversation between two guys who were debating about what to do after learning that they could no longer take the subway home.

“Yeah, I’m done at the next station. You need this more than I do.”

I called my parents when I got home.

I only publish half of my writing publicly. The rest are posted exclusively on my private email list: billmei.net/email (Subscribing is free, no spam ever, and you can safely unsubscribe anytime)